If It Is In The Scale: Example 2

For our second example, we will create a run for a longer passage, using the same principles we used earlier.

Determine where you are trying to put the run.

This run will be placed on the first beat of the fourth measure, at the word “fair”. 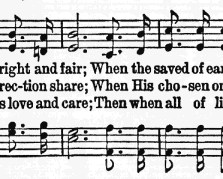 Decide on a target note.

The target note is Ab, the first note of the next phrase, “When the saved of earth…” 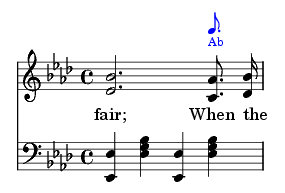 Choose an appropriate rhythm for the run.

Again, since triplets are characteristic of the evangelistic style, they will be our rhythm of choice for this run. 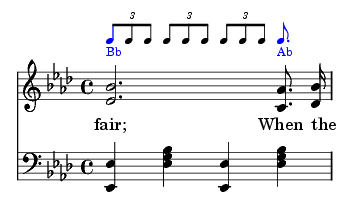 Count how many notes will fit into the run. 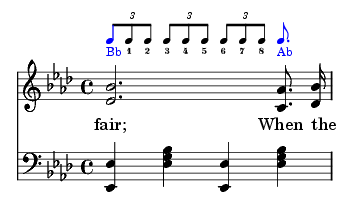 Adjust the starting note so that it is the first note of a chord.

The eight chord tones preceding the target note, Ab, are: G, Ab, Bb, C, Db, Eb, F, and G.  Since the underlying chord is Eb, the starting note G will work well for this run.

Make sure it sounds good!

Play this run as it would appear in the music.  As is common with runs in the evangelistic style, this would sound better if played on octaves.  You can also see that this run can easily push the melody an octave higher, making it a good transition from the basic style of hymn playing into the right hand octave style of playing.  Remember to keep the O/C steady as you play!

This passage offers a good time to put two shorter runs together to form one long, sweeping run.  Use the triplet run you just learned for the first three beats of the measure, then append the one beat triplet run you learned in Example 1 to the fourth beat of the measure.  The end result is a four beat run that, when executed cleanly and crisply, convey the majesty and joy of the words, “When the roll is called up yonder, I’ll be there!”